Exhibition: Experiencing the Filmpoem at An Lanntair Arts Centre, Stornoway, Isle of Lewis (2018). 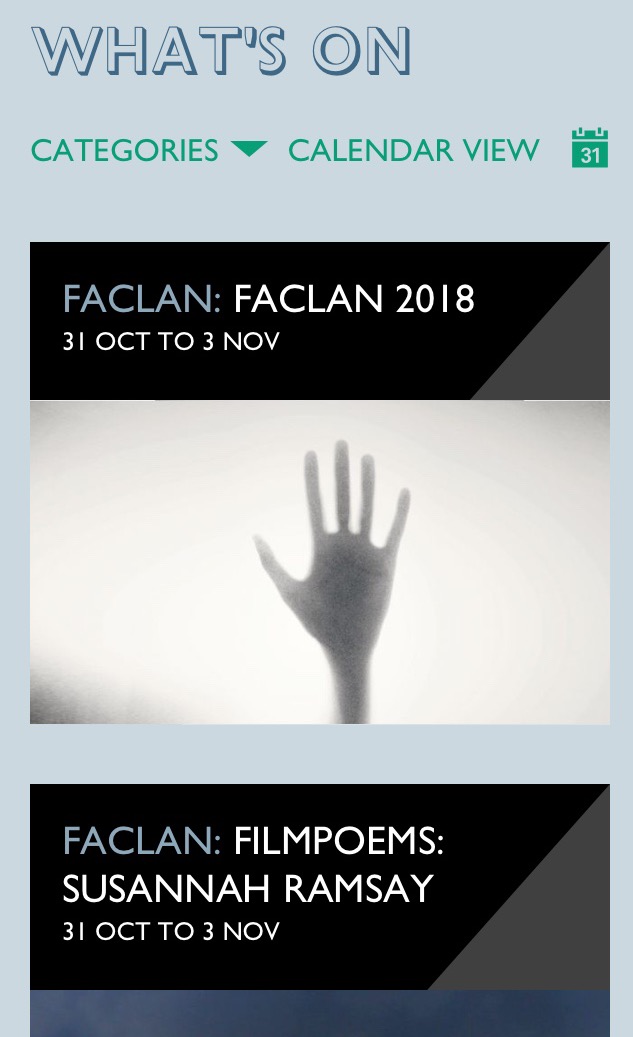 Planning Experiencing the Filmpoem: An exhibition.

In May 2018, I travelled to the Isle of Lewis and Harris with my Super 8mm film camera to shoot always carry a camera, the final filmpoem for my doctoral project, Experiencing the Filmpoem. The film, based on a poem that I wrote several years ago, refers to the emotions I felt when I first stood on the cliffs at the Butt of Lewis in 2001.

always carry a camera, conceived as a three-channel filmpoem installation, attempts to transpose my memories of that moment in time, and of the Hebridean landscape through visual metaphor.

Before my 2018 visit, I had arranged a meeting with Roddy Murray, Founding Director and Head of Visual Arts and Literature at An Lanntair Arts Centre to discuss the possibility of exhibiting my filmpoems. Roddy was kindly introduced to me by Kevin MacNeil, author, poet and creative writing lecturer at the University of Stirling.

During our meeting, Roddy mentioned Fanclan and suggested he was required to include 'fringe' elements in the festival programme. In response, I suggested that my filmpoems could be screened in the gallery space of the arts centre as moving image installations. I also mentioned that because always carry a camera, refers directly to the Hebridean landscape, it would be contextually and culturally significant for the work to have its premiere in Stornoway. Several months later, Roddy emailed to say he was willing to screen my films at Fanclan.

As soon as I got the go-ahead from An Lanntair, I began testing the equipment for the installations. Appreciation goes to my husband, Jeff Lloyd for his help with testing the equipment and setting up the installation. Initially, I wanted to use QLab, an audiovisual exhibition software; however, through experimenting with its capabilities, several technical issues were highlighted. For instance, it became increasingly challenging to sync the three-channel output due to my MacBook Pro only supporting HDMI data cables for two external screens via display ports. To try and solve this issue, I tested a Mini Mac with the QLab software. The Mini Mac has three display ports, supporting three external screens; however, it only connects with DV cables, which I found produced video lag when looped and played over a long period.

As a solution to the many technical issues, I decided to replace QLab with three media players to exhibit always carry a camera.

The decision to produce always carry a camera as a three-channel installation came after I had experienced the David Claerbout installation at Talbot Rice Gallery, Edinburgh earlier in 2018. After viewing the six moving image works in the exhibition, I began to understand that the spatial arrangements of his film installations appealed to the sense of peripheral vision connected to the human eye.

In terms of phenomenological experience, I began to think about how I could develop the idea of this visual sensation through the format of the filmpoem as a moving image installation. I also became intrigued by the powerful emotions evoked through the use of super slow motion in the Long Goodbye (2007).

As this idea developed, I maintained that the spatial configuration of always carry a camera should seek to challenge the peripheral vision of the gallery-goer to produce a phenomenological sensation. In theory, the three screens, positioned in the gallery space (right illustration), should guide the viewer into a place where they can view the central screen while glancing at the other two screens in their peripheral vision. Iterations of the spatial arrangements were produced, including the original idea (left illustration) for an expanded cinematic event.

Experiencing the Filmpoem consisted of four single-channel installations in Gallery One: West of Dalabrog (2016), Dislocation (2016), The Essence of Place (2017) and Imprint (2018).

always carry a camera (2018), the three-channel moving image installation was screened in Gallery Two of the arts centre.

Set-up of the exhibtion in pictures.

Reflecting on Experiencing the Filmpoem, at An Lanntair Arts Centre.

Besides the current mode of viewing filmpoetry, i.e., via the Internet, exploring the different viewing contexts for the filmpoem is paramount to my doctoral research. Previously, my filmpoems have screened in traditional cinematic settings (AHRC Research in Film Awards, 2016, the Festival silêncio, Lisbon, 2017, and the 6th International Video Poetry Festival, Athens, 2018), as an outdoor audio-visual installation (RSPB, Loch Lomond artist residency), and within an art gallery context. Regarding the exhibition at An Lanntair Arts Centre, I engaged with recent academic literature concerning artists' moving image exhibition practices to understand how the filmpoem, as an installation art form, could evolve.

The concept for this exhibition, supported by Chrissie Iles' (2001) seminal work and Erika Baslom’s (2013) research, is synthesised within the written component of my practice-based doctoral research. Iles’ and Balsom’s work establishes and galvanises scholarly criticism for artists' moving image practices, derived in part from the development of the Minimalist art installation movement during the 1960s and 1970s. A key component of my research is based on Maurice Merleau-Ponty's phenomenological perspective that connects the body of the gallery-goer with the surrounding space it dwells (Eye and Mind, 1964), and film-phenomenology. Claire Bishop’s (2005) study makes use of this Pontian perspective, which maintains that the gallery-goer experiences a heightened sense of perception and awareness of space when viewing a Minimalist art installation (and by extension a film installation), in situ. Furthermore, Maeve Connolly’s (2009) considerations regarding the space and place of site-specific artists’ cinema, support the phenomenological implications of spectator experience when viewing both single and multi-screen projections.

Experiencing the Filmpoem comprised both contexts that Connolly discusses. The single-screen films were screened in chronological order of production and looped. The surrounding space was utilised minimally, and the projected screen was more significant in size for this installation than for always carry a camera. The screen size meant that this moving image installation simultaneously provided the intimacy of a traditional cinematic screening while juxtaposing the self-consciousness of a gallery context. As mentioned earlier, an existential phenomenological experience for the spectator links to apperception or the act of becoming self-aware within an art gallery space, as illustrated by Claire Bishop (2005). However, regarding the cinematic spectator, this sense of heightened self-awareness can also occur during a screening in a traditional darkened film theatre, as Jennifer Barker’s (2009) monograph illustrates. Barker’s work makes some crucial distinctions regarding the relationship between narrative cinema, film-phenomenology and embodiment. Thinking about Barker’s work in relation to the filmpoem, I wonder if the intimacy that the genre is synonymous with, which resonates so beautifully within a darkened cinema space, loses an emotional dimension when screened in an art gallery context? Nevertheless, single-screen filmpoems deserve to be continually screened in a traditional cinematic context to preserve the increasingly marginalised experimental film traditions. However, after screening my single-channel films at An Lanntair, I am still compelled to ask if the meanings and spontaneous interpretations, which the filmpoem genre evokes through its unique synthesised form, is in danger of getting diluted or misinterpreted through an art gallery context?

Conversely, always carry a camera, the silent three-channel film appeared to complement the gallery space. Multi-screen HD video installations are synonymous with artists' cinema (see: Maeve Connolly, 2009) and contemporary artists' moving image traditions, and can, in a sense, support the gallery context more robustly than single-screen works due to the relationship between the viewer, the screens and the gallery space. Writing in my thesis, I have suggested that Maeve Connolly (2009, p. 64) considers multi-screen installations to be generally immersive experiences, thereby embodying the spectator. Additionally, I would maintain that irrespective of screen size, an immersive experience can also be engendered through responding to the content of the filmpoem. For example, the gallery-goer's emotions could become embodied through engaging with the haptic and tactile images or the spoken words or the soundscapes, a response analogous to the immersive-ness felt when reading a poem or a novel. Multi-screens tend to draw the spectator’s attention away from the single screen, towards the surrounding space and the in-between spaces of the screens themselves. The perceived spatial awareness can, therefore, influence the interpretation of a film installation. For example, because always carry a camera emphasises peripheral vision, theoretically the gallery-goer is primed to acknowledge and interpret the in-between spaces as an embodying force in determining an interpretation.

This theory was realised when setting up the gallery space for the three-channel film (see pictures below). When positioning the three projectors in relation to the seating in Gallery Two, consideration regarding the utilisation of space was paramount. If the projectors were ceiling mounted in the arts centre, then the floor space would have been less cluttered. Due to the lack of ceiling supports, mounting the projectors at height was not an option. To overcome this, I had to arrange the podiums for the projectors very close to each other and near to the seating area. This resulted in reconsidering the size of the projection screen. Compromising on the screen size was the preferred option, as interpreting the peripheral visual experience was infinitely more important to this project.

The intersubjective relationship between the filmmaker (me), space, and the artwork was crucial to the exhibition of my filmpoetry at An Lanntair. Audience experience was further emphasised through the inclusion of iconic landmarks presented in the film. always carry a camera included landmarks synonymous with both the Isle’s of Harris and Lewis, such as the standing stones at Callanish, west of Stornoway and a view of Scarp from Hushinish beach, on the west coast of Harris. This film project aimed to embody the spectator through prompting their own memories of the Scottish landscape and the heritage of the arts centre to enhance meaning, a response, which is evidenced in this tweet from Dr Kathryn Mannix. 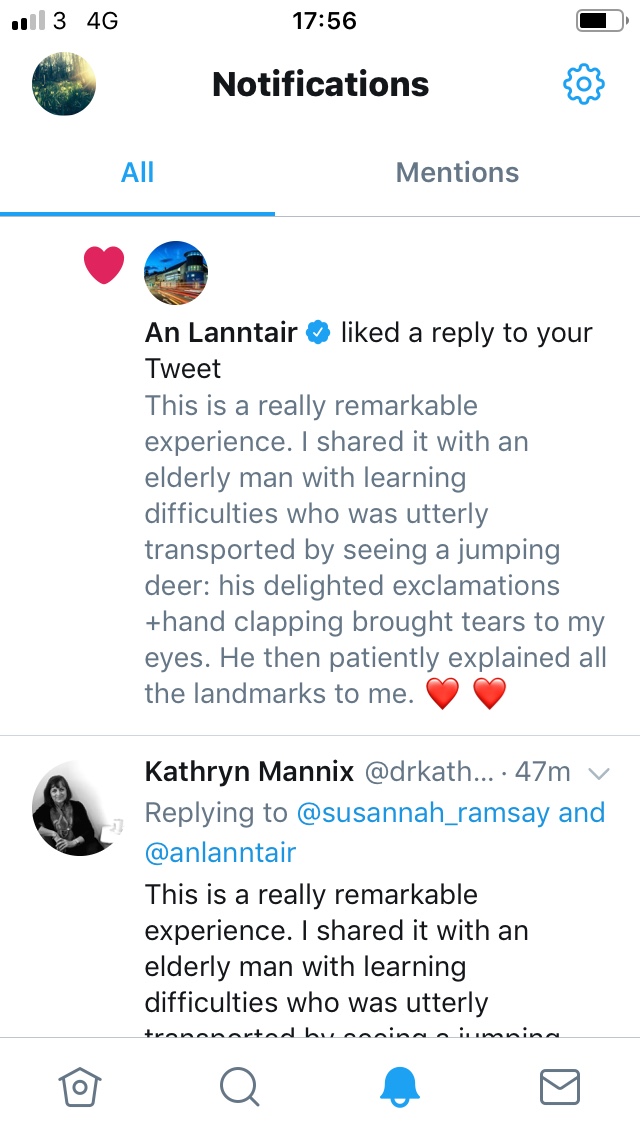 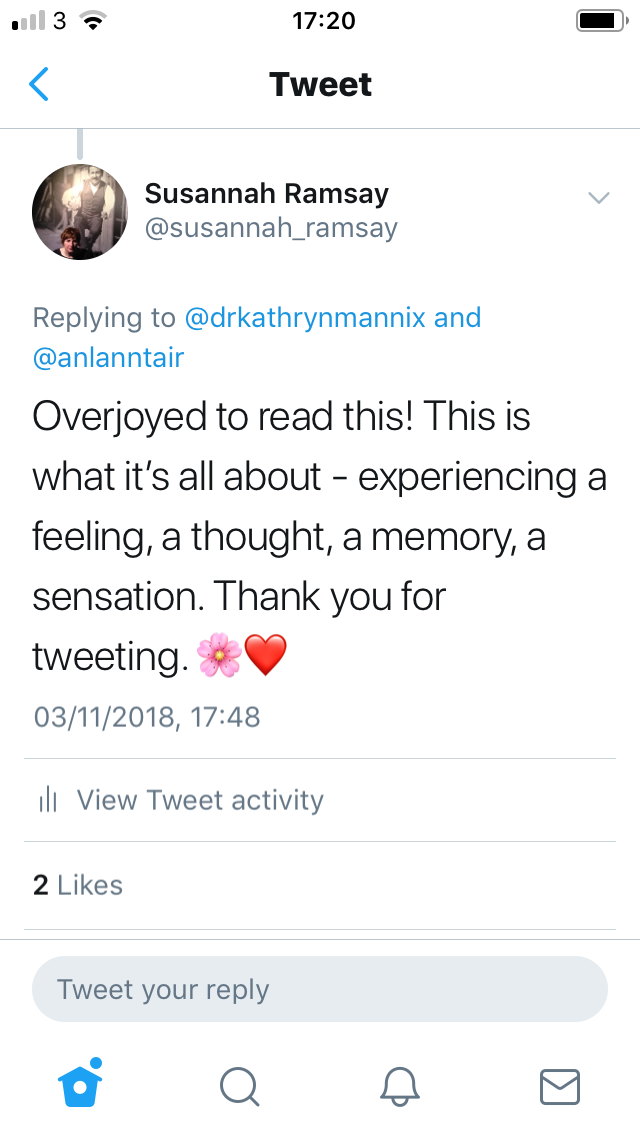 Blog archive: The World According to Grierson, ‘Drifters’ at the Hippodrome Silent Film Festival (20